There are marketing campaigns that make us stop and take a second look. And then there are some that get the whole world talking.

In the digital marketing world, ‘viral’ is what makes the big bucks. Here we are going to take a look at 7 of the most viral ad campaigns of all times.

During the 2013 Super Bowl power outage, Oreo scored big with its timely tweet that said – “You can still dunk in the dark”. It quickly caught on with 15000 retweets and over 1000 shares. 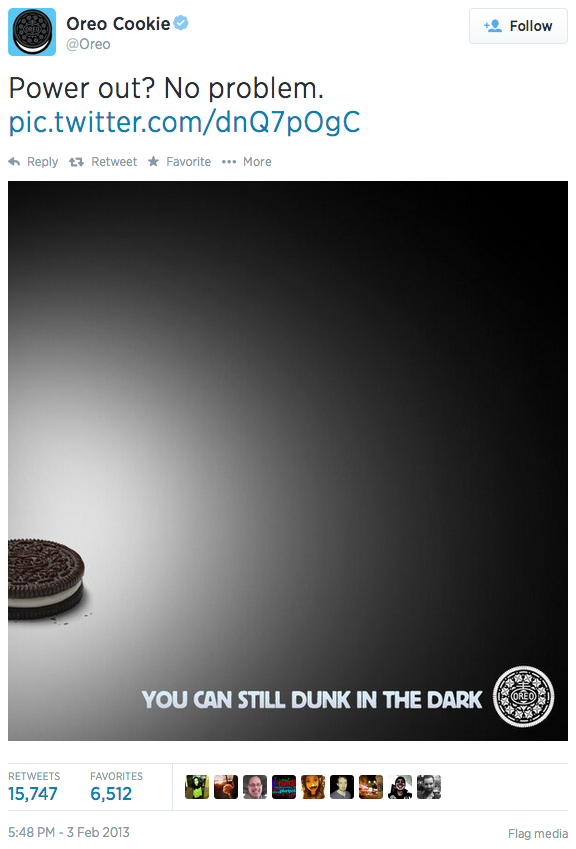 Oreo – “You can still dunk in the dark”

Why it Works: It’s pretty clever what Oreo did. It focused on two things: people’s addiction to social media and the 34-minute blackout – and put its own twist to the mix. This is real-time marketing at its best.

Every now and then, the fitness-focused website comes up with fitness challenges like “30-Day Get Lean Challenge”, “8-Week STRONGER Fitness Challenge”, “30-Day Squat Challenge” etc. They come with detailed instructions on how to achieve the goal including video guides, diet plans etc. These campaigns increase user engagement considerably. Livestrong.com also has a Facebook group dedicated to the challenges where participants can get daily tips and motivation. This group has more than 23,000 members.

We have worked on the Livestrong STRONGER program. Users sign up for this program to receive personalized diet charts, fitness tips, and workout videos. Check out more details here.

Here’s a one-minute trailer with Nicky Hollander for the STRONGER program.

Why it Works: It is cleverly designed to engage its strong community of followers. Everyone likes a challenge. It’s actionable. It isn’t too difficult to follow. And most importantly, the challenges promote healthy living.

In 2012, Lay’s decided to hand over the reins of its new chip’s flavor idea to the public. They launched the ‘Do Us a Flavor’ campaign that asked people across the U.S. to come up with chip flavors. The winner gets $1 million. 4 million flavor submissions and 1 million votes later, Cheesy Garlic Bread was chosen as the winning flavor. The grand prize was awarded to librarian, Karen Weber Mendham.

The contest did two things for the company:

Owing to the success of the contest, it has been re-launched thrice since then.

Here’s the advertisement for the second contest in 2015.

Why it Works: It works because it puts the power of decision-making in the hands of the customers. It gives the customers exactly the flavor they are looking for without the company having to sweat out a flavor idea. It’s genius.

4. Dove – “You are more beautiful than you think”

Dove came up with a heartwarming ad film in 2013 to empower women about their beauty. It features Gil Zamora, an FBI-trained sketch artist. He creates two portraits of each woman participating in the experiment – one on the basis of the description given by the women themselves and the other as described by the strangers who had met the women for the first time. It turned out that the latter was more beautiful. It goes to show that women are far more beautiful than they perceive themselves.

Why it works: Dove didn’t promote any of its products in this ad. Instead, it promoted a social cause featuring real women. It connects to the emotions of the viewers and that makes it an instant hit.

This campaign not only fulfilled its purpose but also raised $115 million that led to an increase in the ALSA’s research budget.

Here’s a video of Bill Gates taking the challenge:

Why it works: People love participating in social causes. It’s selfless and it has a feel-good factor about it. Also, each participant had to nominate 3 people to take the challenge within 24 hours. This created an urgency which worked to the campaign’s favor.

Another Super Bowl hit, the Budweiser’s “Puppy Love” commercial launched during the game took off immediately. As a part of the beer company’s #BestBuds campaign, this commercial shows the friendship between two animals – a puppy and a horse. The 1-minute video uses Passenger’s “Let her go” as the background song. It was shared 2 million times on social media and was viewed 23 million times on YouTube.

Why it works: It uses sentiment and takes people on an emotional journey. The vintage setting of the ad was an added bonus. The usage of the song added a dramatic effect. This ad takes a light approach to marketing by not putting the spotlight on the product. It focuses on storytelling instead.

Released in 2013, Volvo’s “Epic Split” commercial took the Internet by storm. It shows Jean Claude Van Damme doing a perfect split on two reversing Volvo trucks with Enya’s “Only Time” playing as the background score. The ad goes on to portray the precision of Volvo Dynamic Steering that enables the drivers to maintain proper distance and speed.

It has generated 88 million views to date.

Why it works: The commercial is visually appealing and impactful. People tend to remember things like this. While the celebrity factor works well, the concept is a conversation starter. (Have you seen The Epic Split?) It has that ‘wow’ factor that we are all looking for.

When it comes to viral marketing ads, there is no one universal recipe for success. Therefore, it’s very difficult to predict whether an ad will become viral. However, what you can focus on is increasing engagement.

If you take a closer look at the ads above, you will find that they have two things in common: simplicity and relatable content. To achieve these, you need to have a strong understanding of your customers.

Once you get these right, you’ve done most of the work. Now you can focus on compelling graphics and animations to attract attention to your ad.

CLAIM A FREE UI AUDIT OF YOUR SITE

Please allow us 24 - 48 hours to compile the audit report.